The nice thing about Whitehorse Yukon is there’s quite a few day trips and overnight trips you can easily take. I’ve done a few, so if you’re interested In Whitehorse, Haines Junction, Dawson City, Kluane National Park, The Dempster Highway, the Northwest Territory’s etc, check out some of my blogs from last summer.

I took a little trip to Haines Alaska with my mom, brother and fur nephew from Whitehorse. If you look at the map below, go west from Whitehorse to Haines Junction Southeast to Haines. Approx. 390km drive (242 miles), very scenic drive, probably one of the more beautiful mountain drives I’ve done. The Dempster Highway (Yukon to NWT) and the Icefields Parkway (Banff to Jasper Alberta) are some of my favourite Canadian mountain drives that are totally worth doing. I would add the Whitehorse to Haines drive to that list. 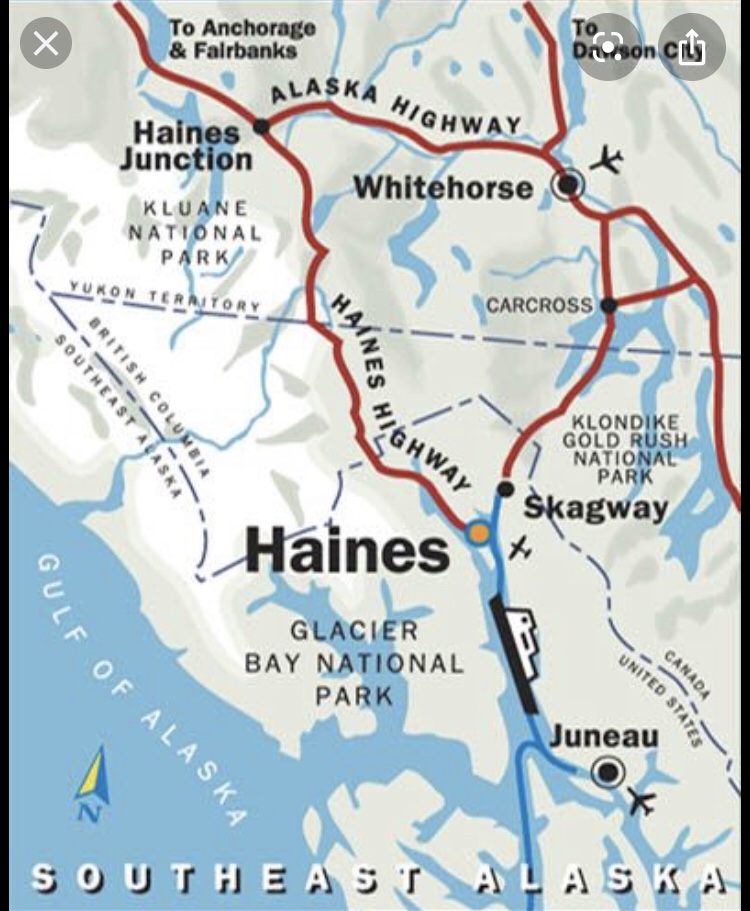 So turn your clocks back an hour because we’re going to Southeast Alaska! Yes, Southeast Alaska is a real thing! I found this website that breaks down the stops and hikes along part of this scenic drive between Haines Junction Yukon and Haines Alaska. 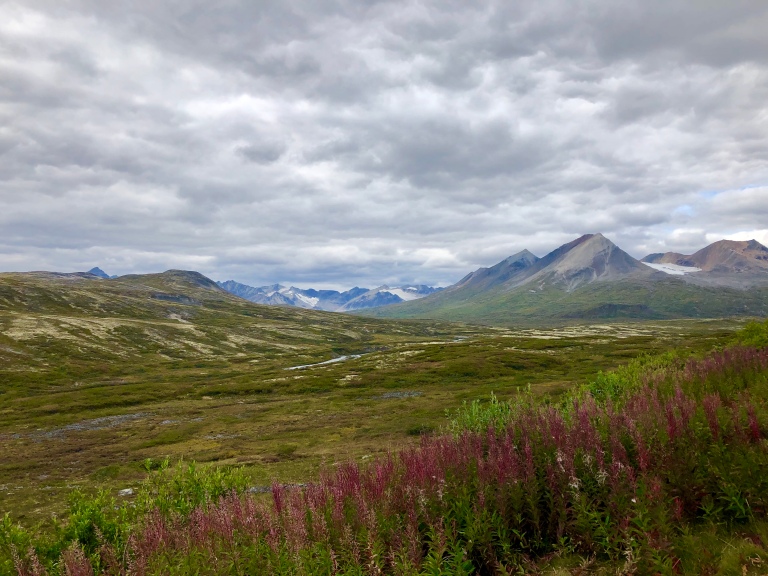 Many roadside turnouts, wasn’t a busy highway so lots of opportunity to stop for pictures. A little red fox was sure curious about what I was up to!

This drive reminded me of parts of the Dempster Highway. Very beautiful. This is the Chilkat Mountain range. 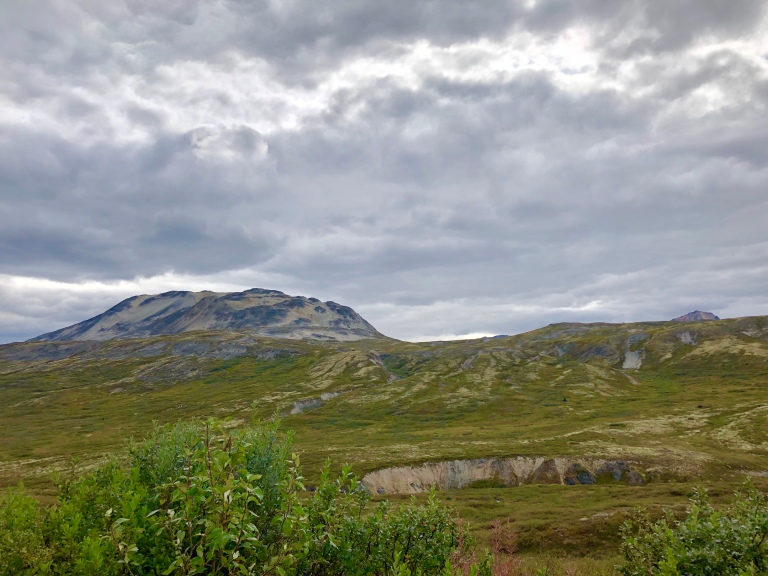 These mountains are known as the Three Guardsmen.

Large bear carving from a marble boulder by Judd Mullady. 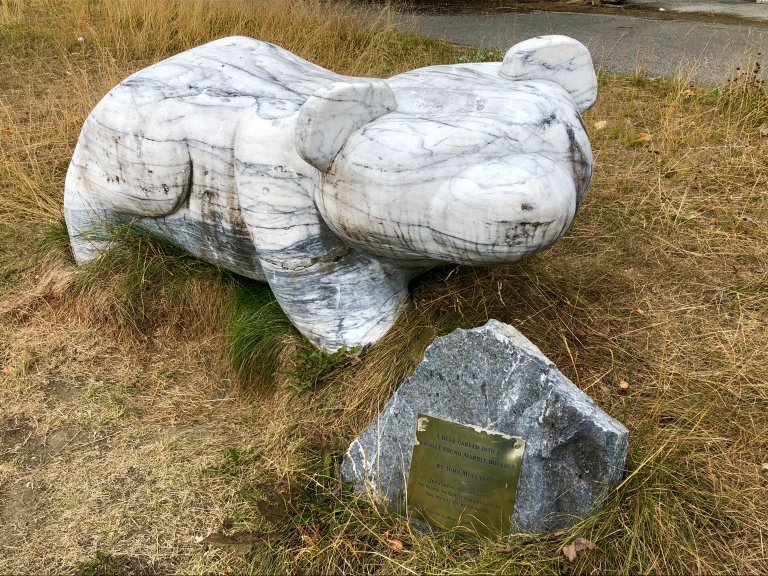 Haines Alaska! Population of approx. 1,700. Lots of history here. This land was originally Indigenous land by the Chilkat group of Tlingit. Then the Northwest Trading Company came in, then the Klondike Gold Rush, then a US army post; the Chilkoot Barracks. Today, Haines is mostly a commercial fishing town. These big white buildings are the old army barracks.

Haines Harbour. Lots of fresh seafood here such as salmon and halibut. 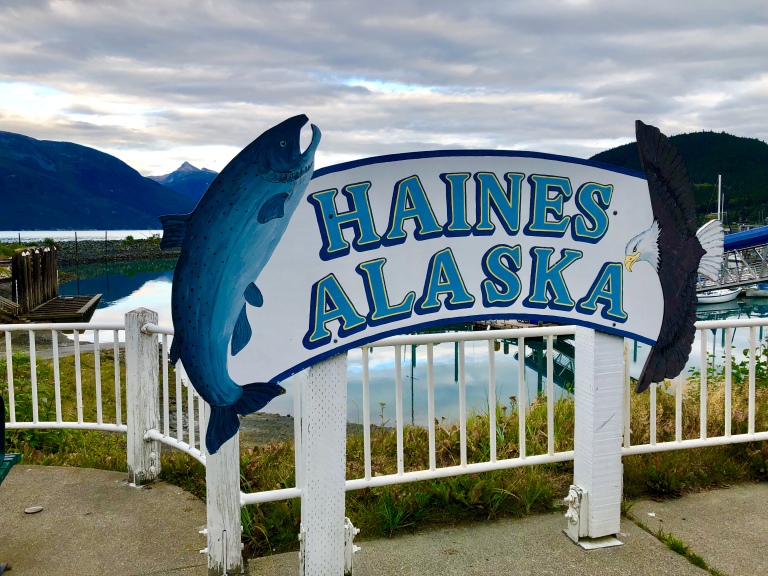 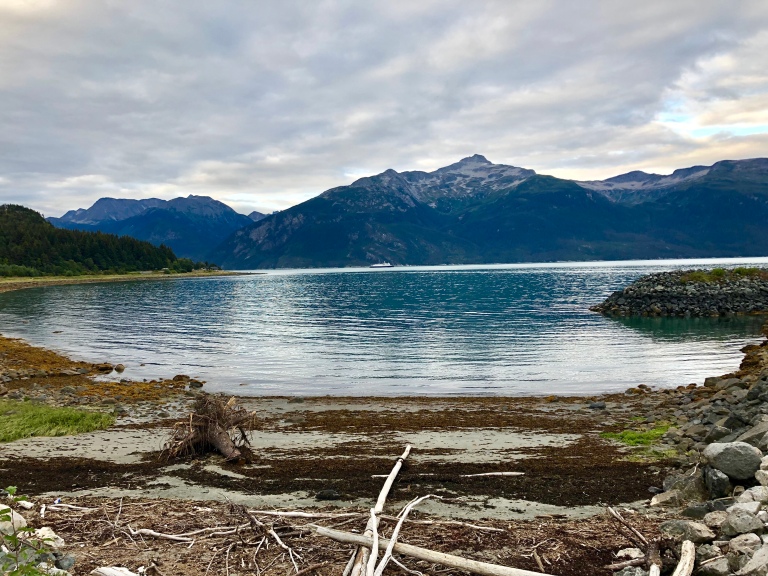 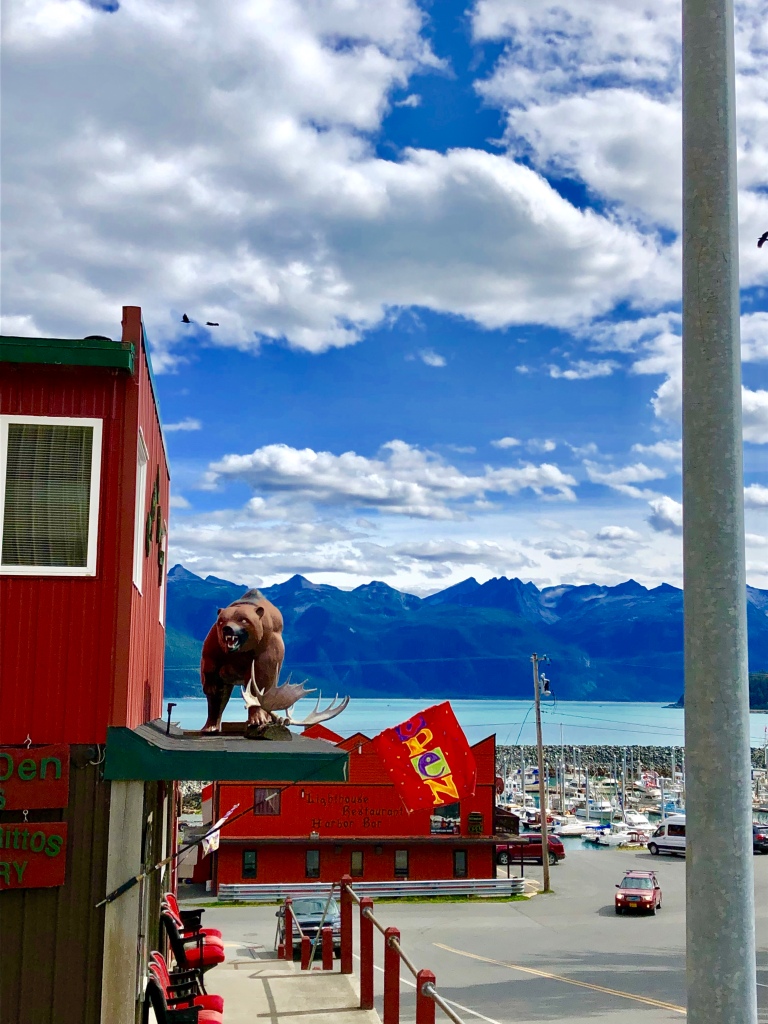 Salmon Run Campground. We stayed here a couple nights. Very beautiful spot. Can’t beat the view! My mom and I shared this little one bedroom cabin, and my brother and fur nephew shared a tent. 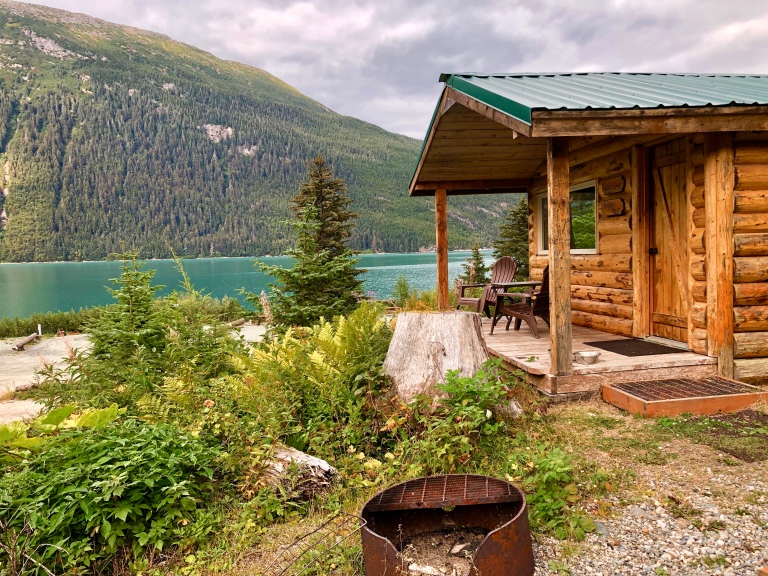 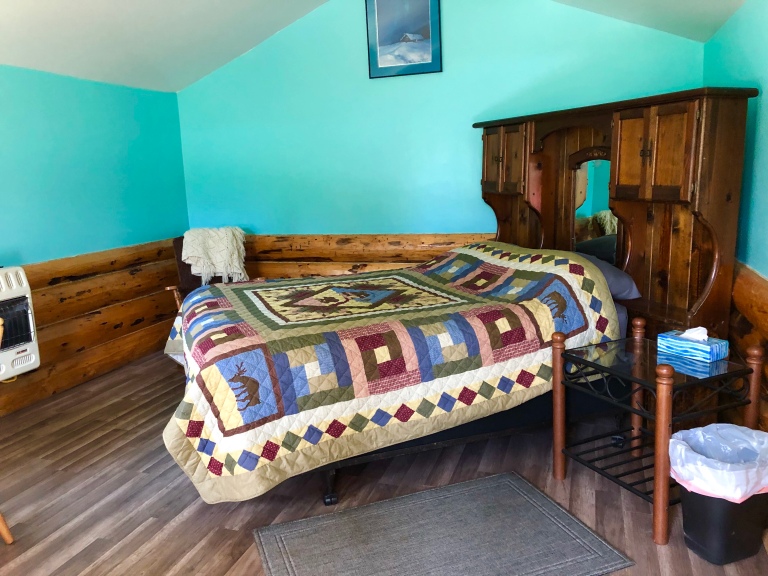 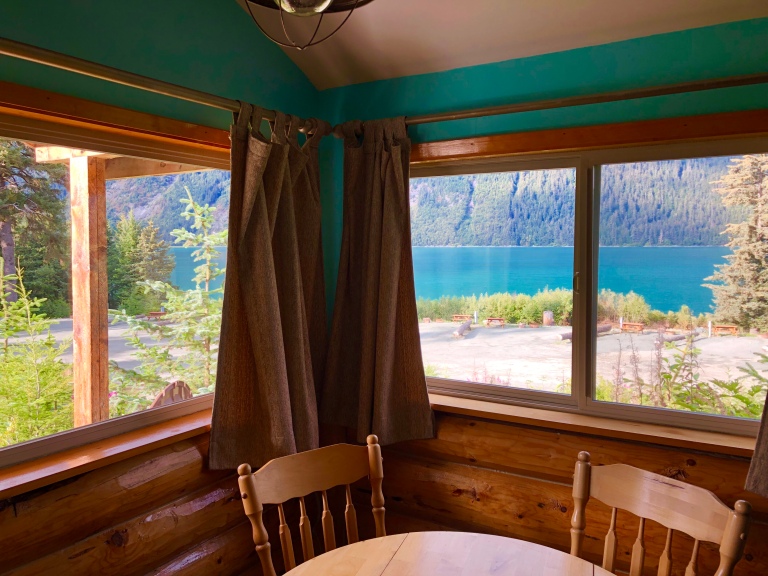 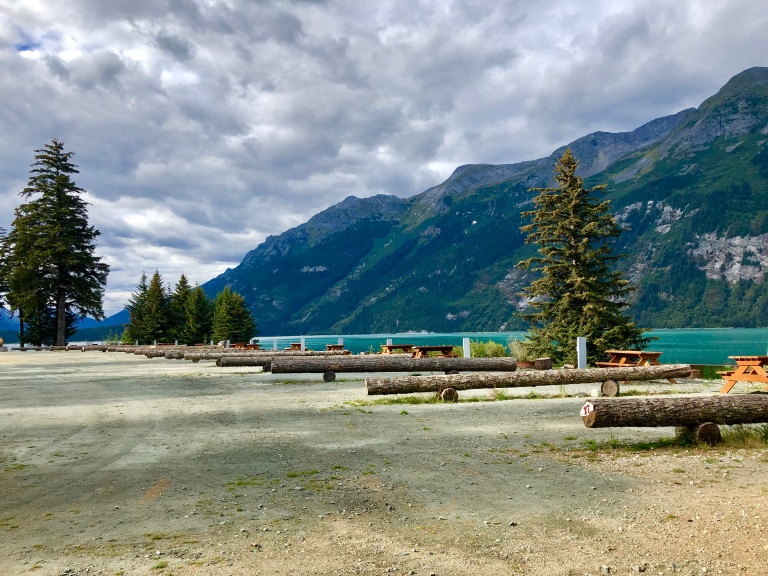 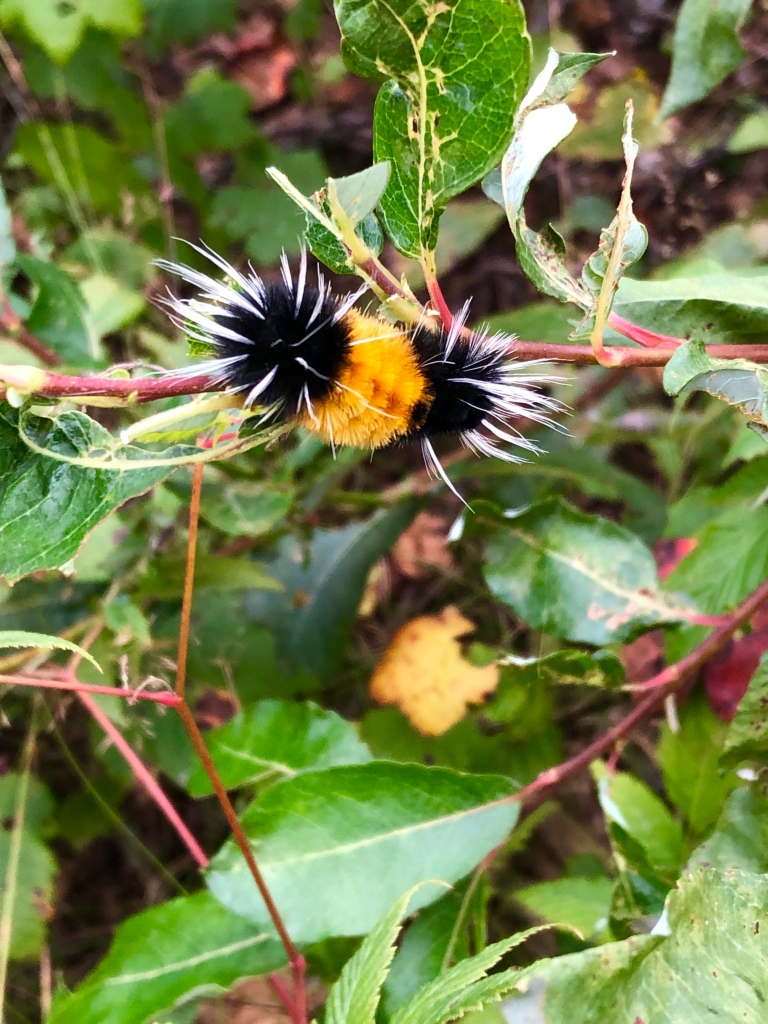 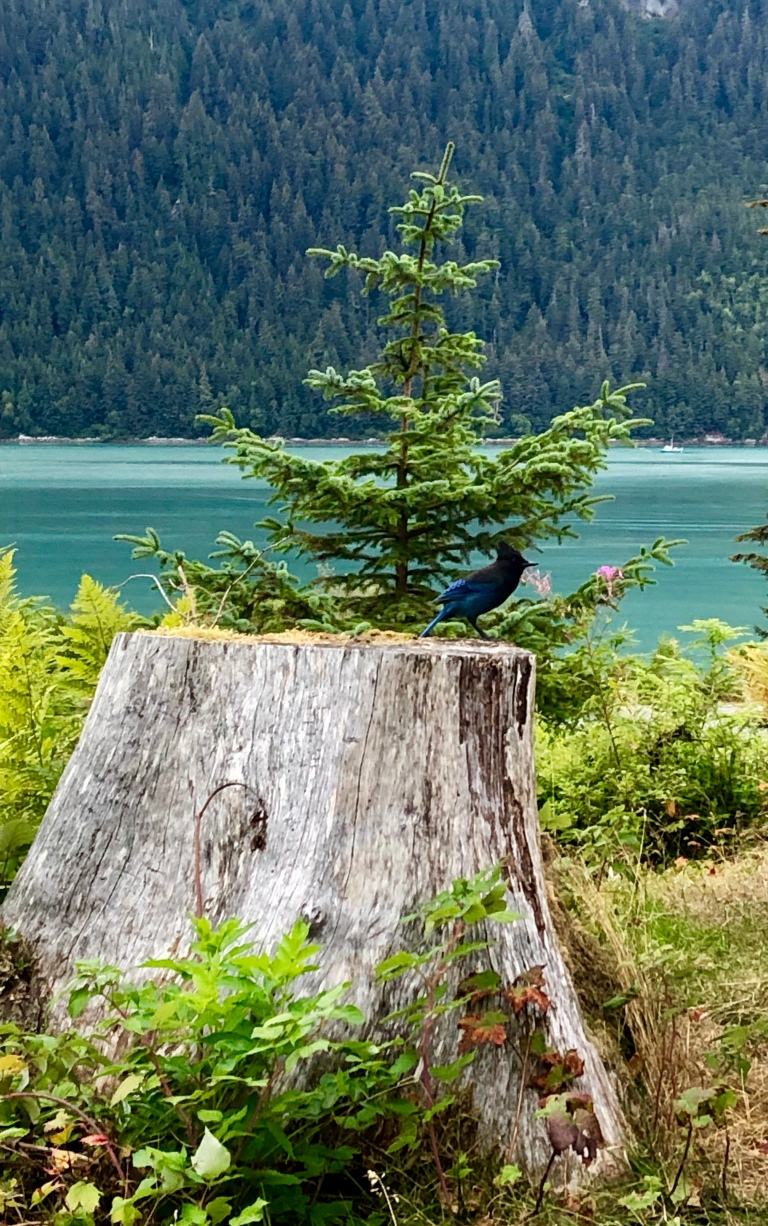 The most handsome Alaskan Malamute you’ll ever see! 😍

The Chilkoot River flows into the Lutak Inlet, which is a popular grizzly bear viewing spot as they hunt for salmon here. Word on the street is early morning is the best time to catch them out. We didn’t see any bears, just lots of people waiting patiently with cameras in hand. The bears probably could smell the desperation and decided to eat berries in the woods instead. 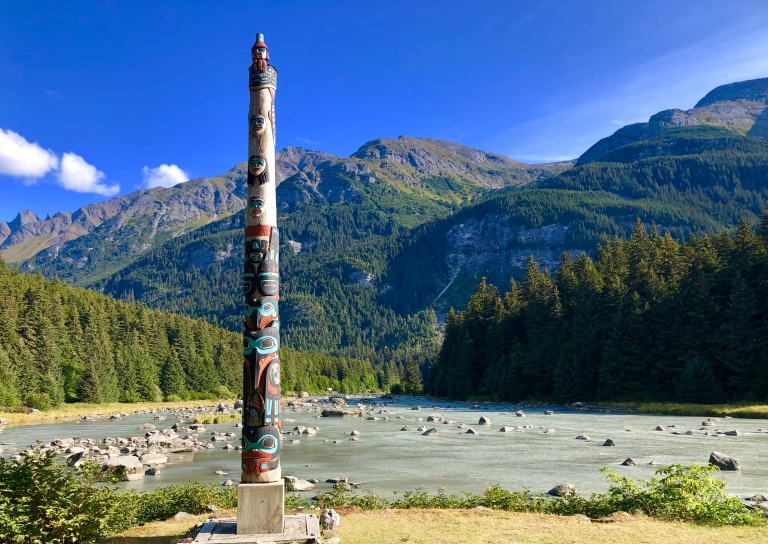 We took a drive around the area. This is Mud Bay. Very beautiful. Someone found a pile of fish guts to roll around in, I’ll let you guess who that was from the three in the pic below. Remember, there’s no wrong answer. Anyway, that made for a bit of a pungent drive. 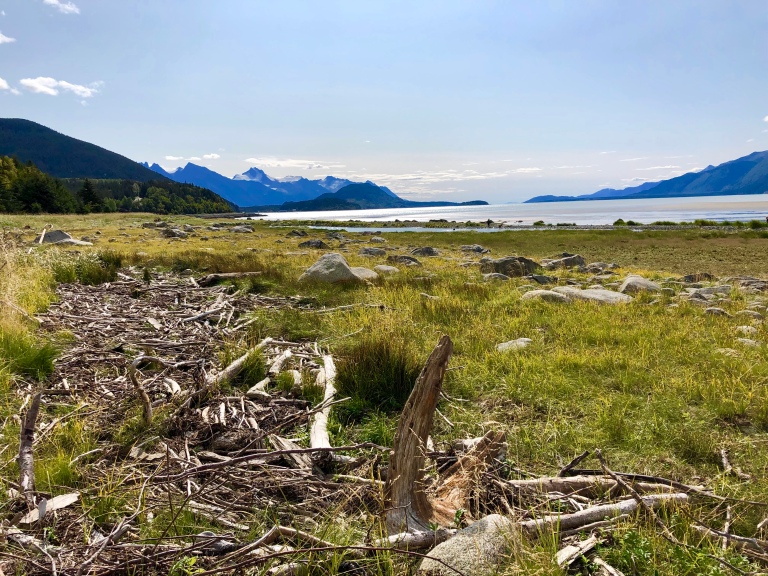 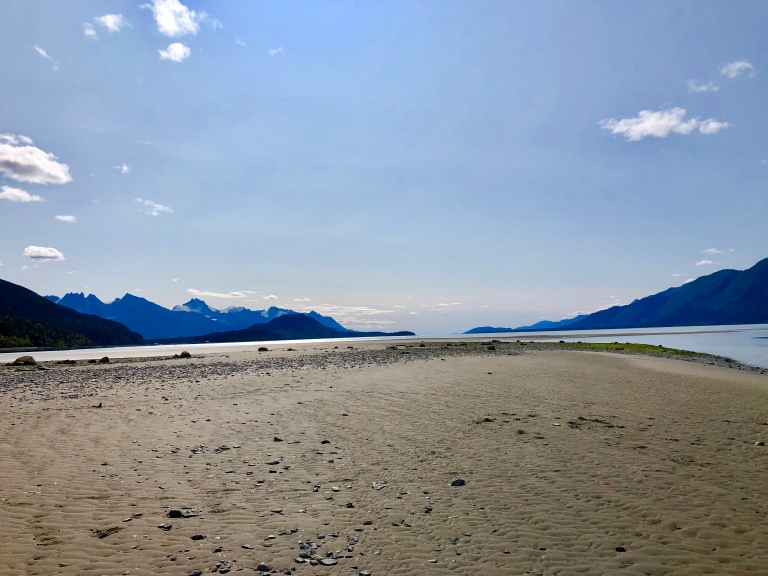 Made it back to Whitehorse, then a couple days later we’re back on the road to Alaska’s favourite tourist trap; Skagway! This time we are going from Whitehorse south to Carcross to Skagway. Approx. 175km drive (108 miles). Lots of stops along the way. Also a very scenic drive. You can also take a ferry between Haines and Skagway. I went to Skagway last summer and did a blog on this drive from Whitehorse, So if your interested in more on this drive, check out my blog Whitehorse to Skagway Alaska. Below are just a few pics from the day.

Now that we’re fish gut free again, let’s roll! And yes, he was the guilty one! Did you guess correctly? Don’t feel bad if you didn’t, It’s often the one you least suspect. Now, the unspoken rule with sharing his backseat is that he must be continuously petted. Don’t worry if you forget, because if you stop petting him for more than three seconds, he’ll happily remind you with a gentle tap on your forearm with his paw. Now if you choose to ignore the gentle tap, more force will be applied with each additional tap until the petting is reinstated.

Fraser, British Columbia. To get from the Yukon to either Haines or Skagway, you do have to go through northern B.C. 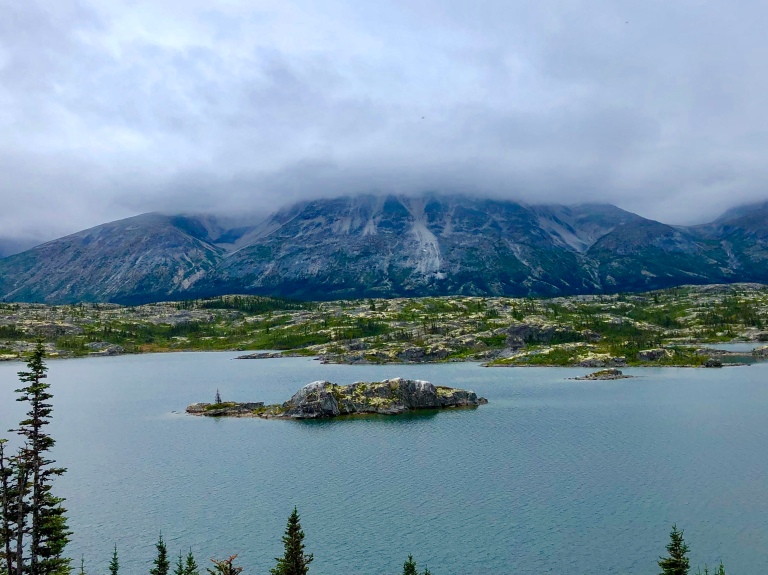 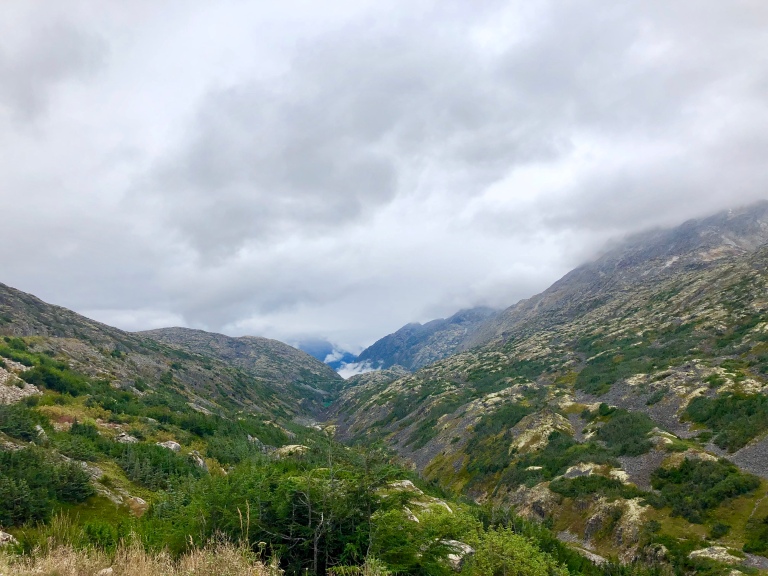 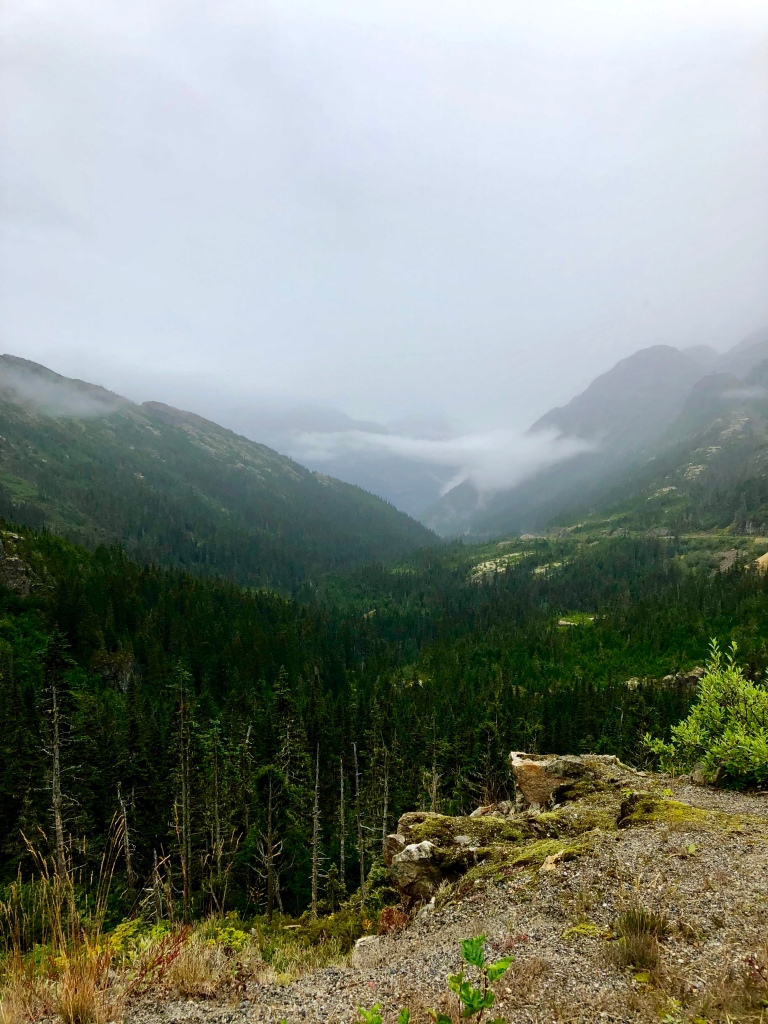 Downtown Skagway. Population about 900 people. A major port of Alaskan cruises, so very touristy. Tons of shops selling the same touristy stuff. I hear many shops are owned by the cruise ship companies. Makes sense, they’re all quite repetitive. Seems like every third store is a jewelry store. We just came for supper and looked through the shops. Two cruise ships were in when we arrived, so it was very congested with people, then it just thinned right out. You can see one of the cruise ships docked at the end of the street. 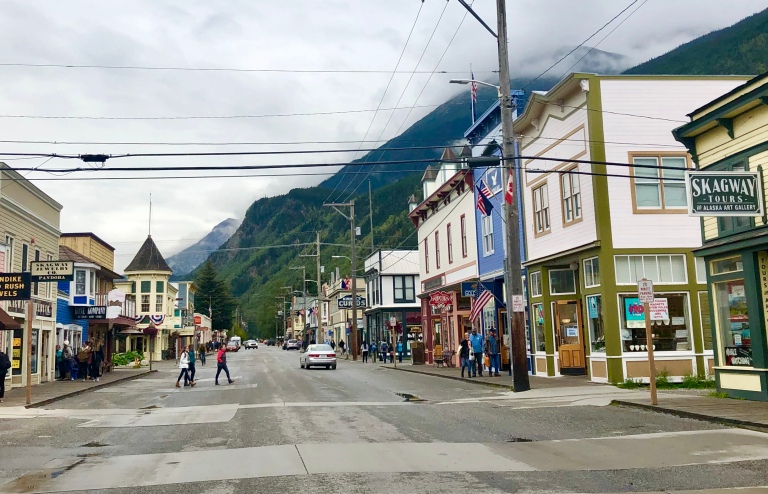 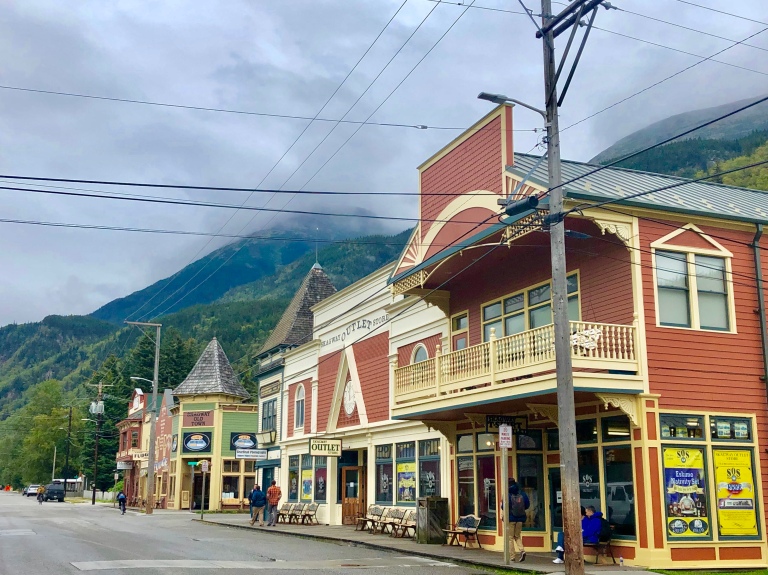 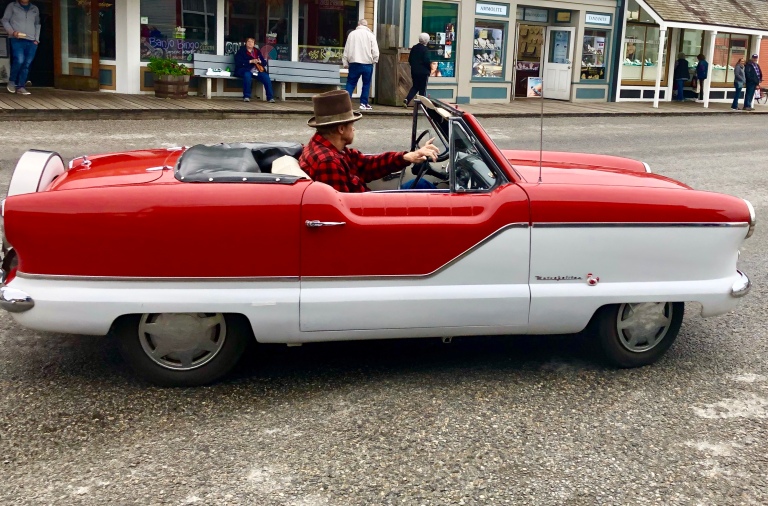 Got my Christmas shopping done….

Beautiful drive. Even though this was mid August and it’s still summer, the leaves were already changing. One of my favourite times of year! Some of the pretty colours on our way back to Whitehorse. 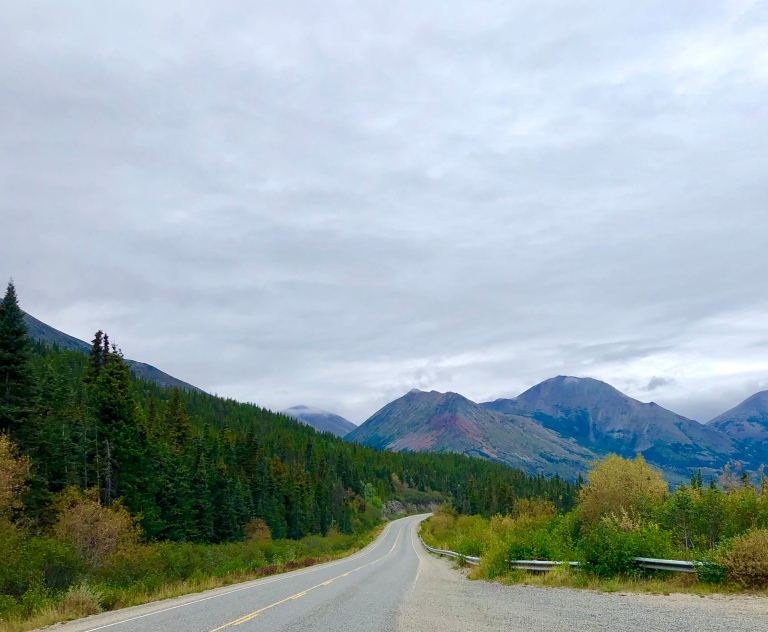 Well that’s all I got for a couple day trips to Alaska. Always enjoy the drives in this part of the world. Back to the Yukon, where two red foxes have moved in under the deck next door. They sure do enjoy teasing the dog! 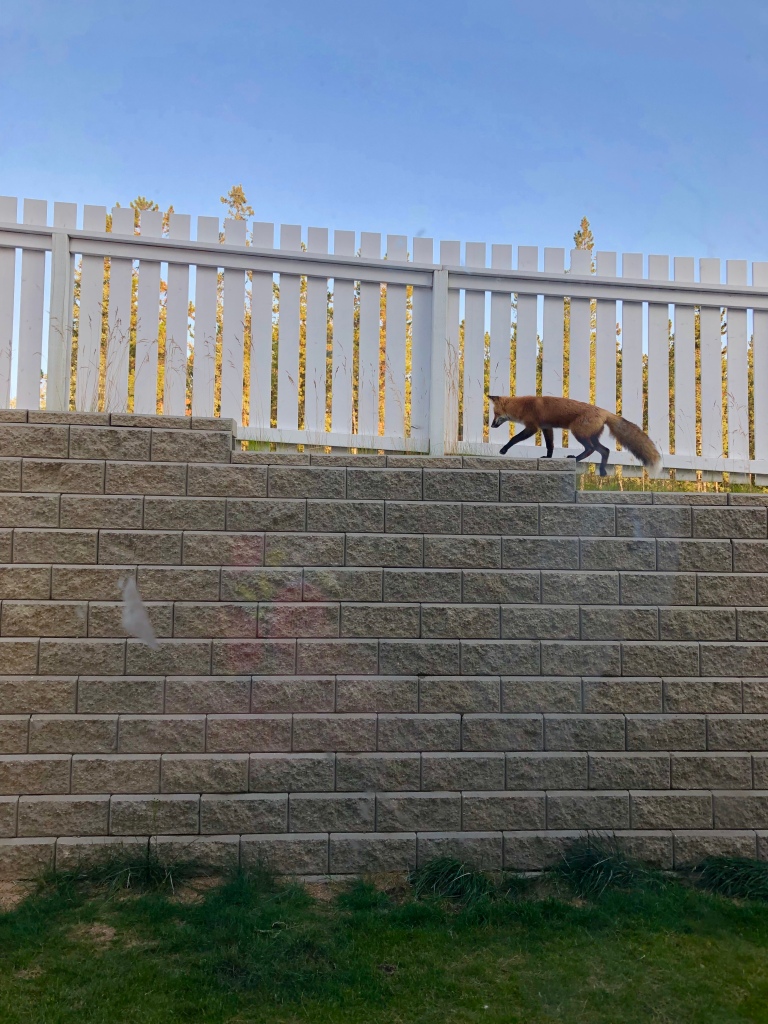 4 thoughts on “The Road to Haines and Skagway Alaska! 🇺🇸🦅”