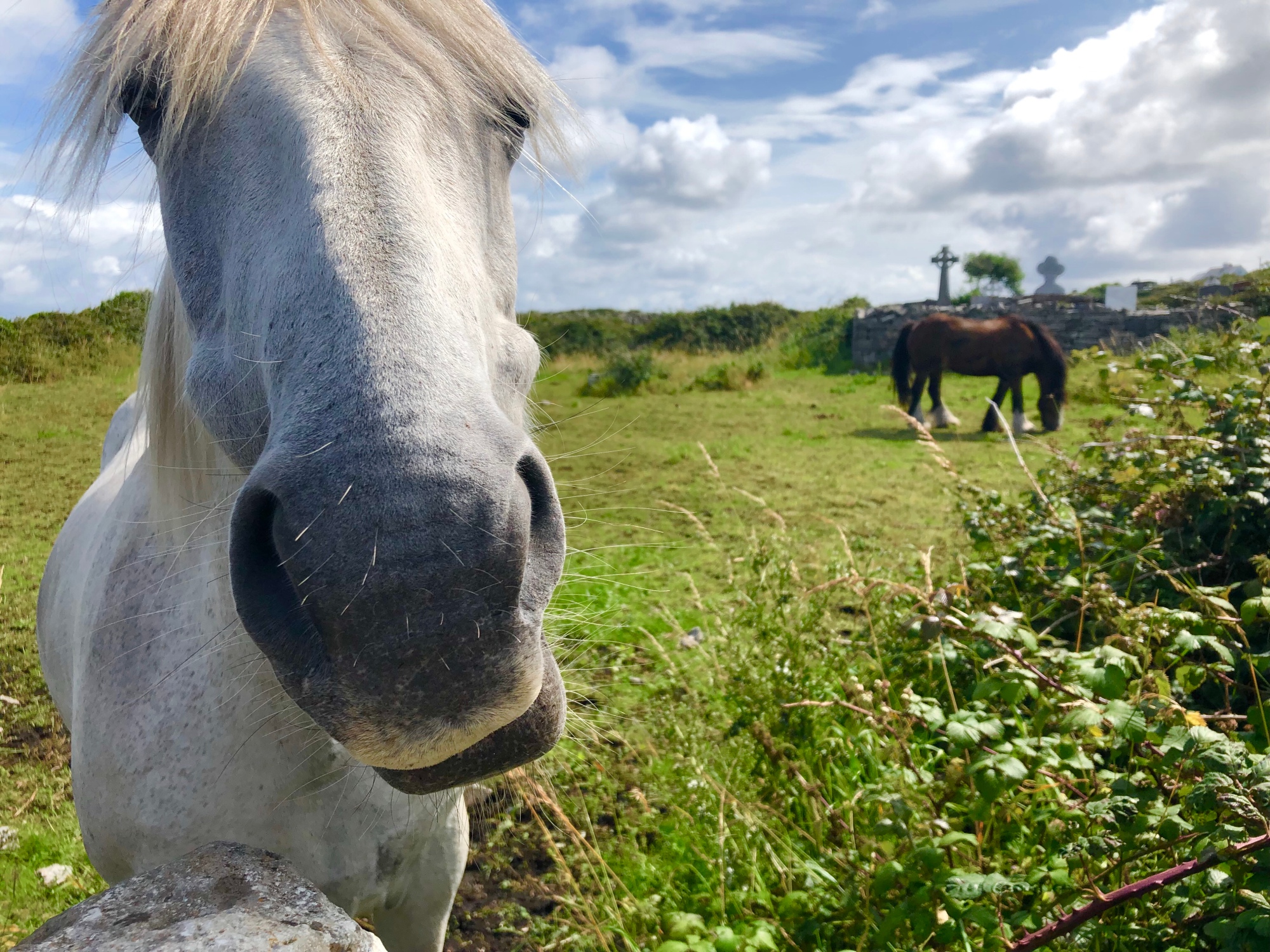 Here’s my blog for Galway to Killarney Ireland. I’m on my Intrepid Travel tour, Northern & Southern Ireland. It’s a seven day tour starting in Belfast which I covered in my last blog. Small world, so the guide Phillip I had last December in Germany, Austria and Hungary, is the same guide I got for this tour. The likelihood of that happening is so incredibly low. Nice surprise as I really liked him last time, so this time he upped his game as Ireland is his home country. He added some extras into the itinerary that really made this tour! Here’s my lovely tour group. It’s rare I like my entire group, that’s the icing on the cake!

Galway. Population of about 80,000. Coined the cultural hub of Ireland. This was our first stop.

No leprechauns, no pot of gold found. What gives!

O’Connor’s is a famous pub around these parts. Most recently noted for Ed Sheeran filmed his video for Galway Girl. But without that, it’s really a cool fun pub, great music, and they say the best Guinness in town! I had my first Guinness here, and for not being a beer drinker, I’m a fan! 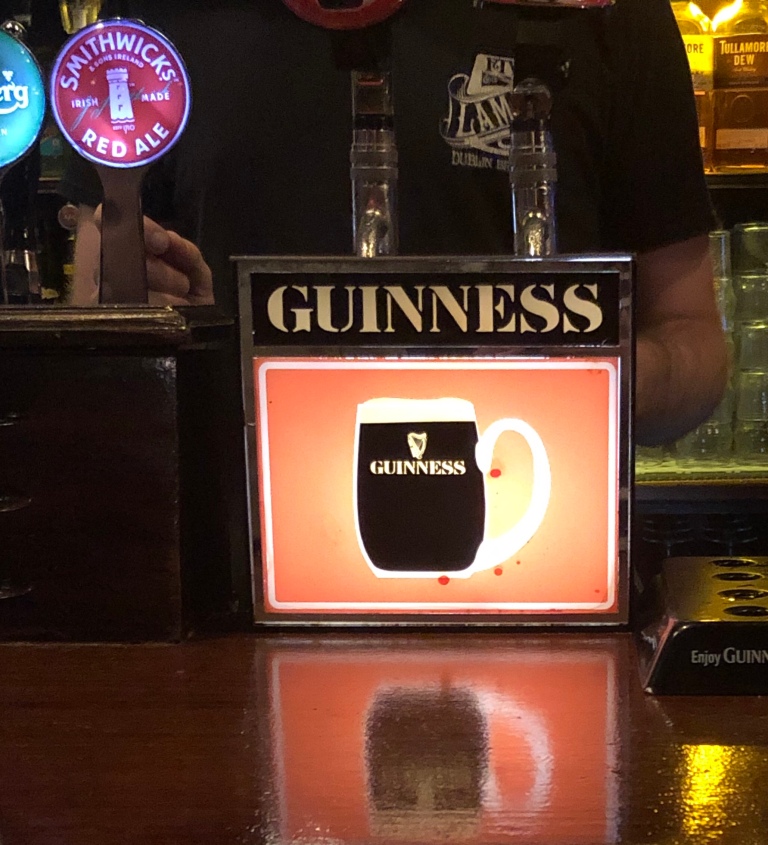 Now I can’t talk about Ireland and not mention music. Music is such a large piece of the Irish culture. I love that you see so much live music in pubs, on the street.

All these YouTube videos are my videos. I had to upload them there, as the videos on my blog were uploading without audio. 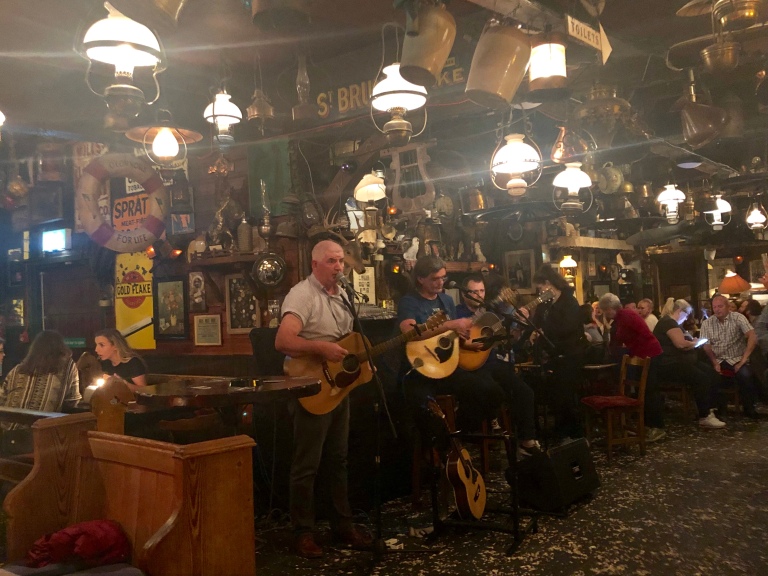 Popular fish and chips restaurant in the Latin Quarter. Ireland being an island, seafood is great everywhere!

We took a day trip on a passenger ferry to the Aran Islands. These are 3 islands off the Galway Bay. One of the interesting things about it, from the beginning of time it was covered with all these tiny rocks. For centuries, the locals have made all these rock fences to create grazing land for cattle, sheep, donkeys and horses etc. So you see these fences everywhere. They still make them and upkeep them today. Also the rule is, if the wall gets knocked over on your side, you fix it. If it falls on the neighbours side, they fix it.

They are also known for their wool, so buying something from the Aran Sweater Market is a must! If you miss it here, there’s a store in Killarney and Dublin. But the Aran Islands store had the best selection in my opinion! 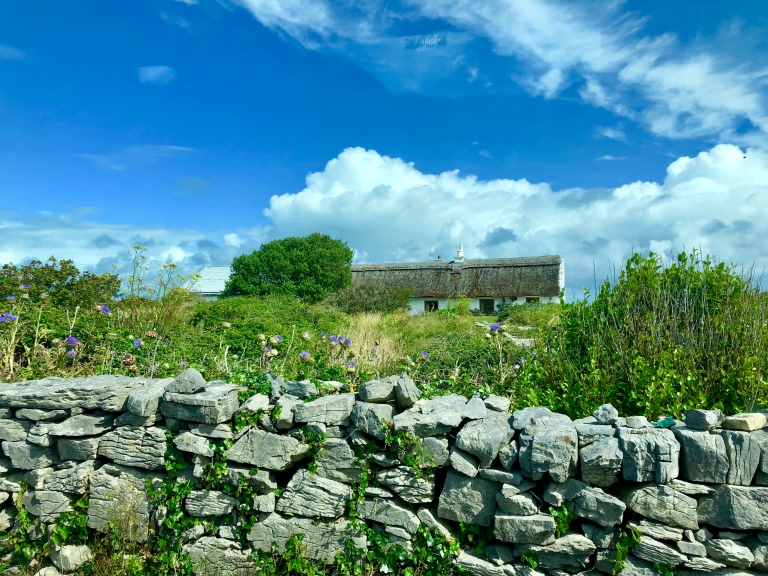 There’s also an old Fort you can walk up to called the Dun Aonghasa. Wear good shoes because the rocks are slippery in the rain, and it’s rainy all the time!

Some of the cleanest beaches and water in the world. We could see sea lions out in the distance.

Beef and Guinness stew! Very popular in Ireland, one of the best dishes to get on the island!

Dunguaire Castle from the 16th century. 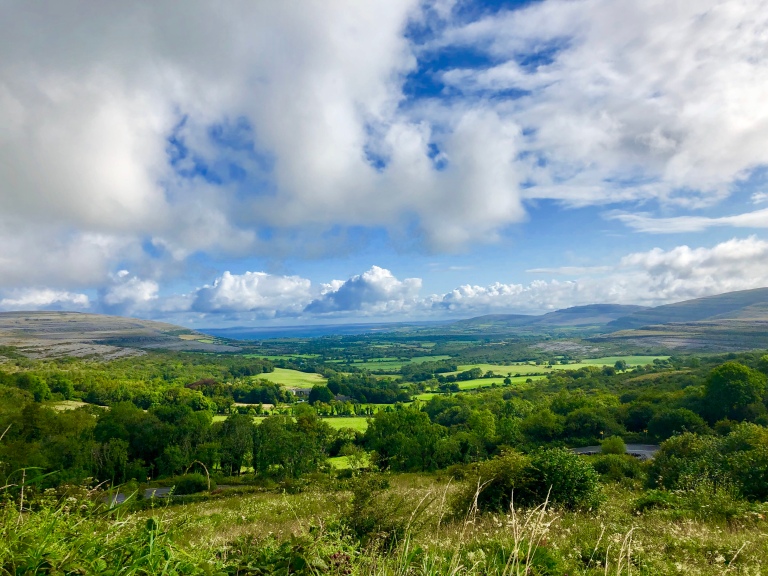 Some houses still use the old school method of thatched roofs. Apparently the house insurance is quite high for this type of roof, no surprise there. 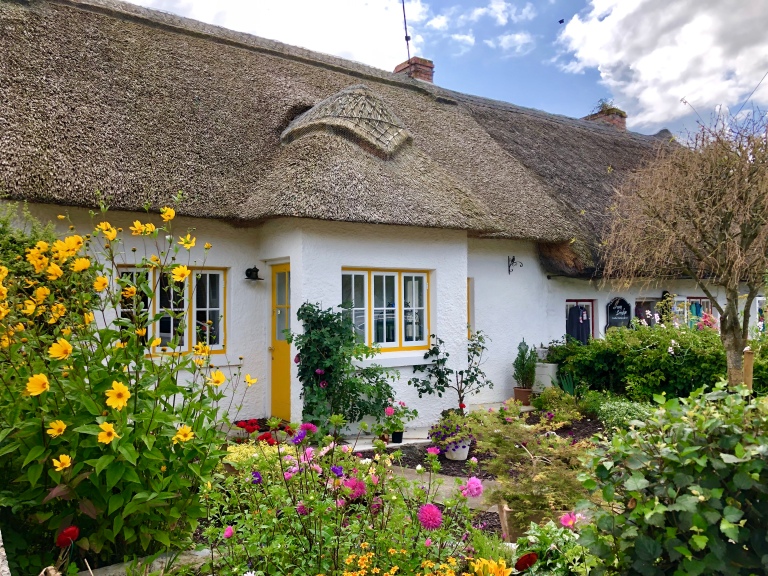 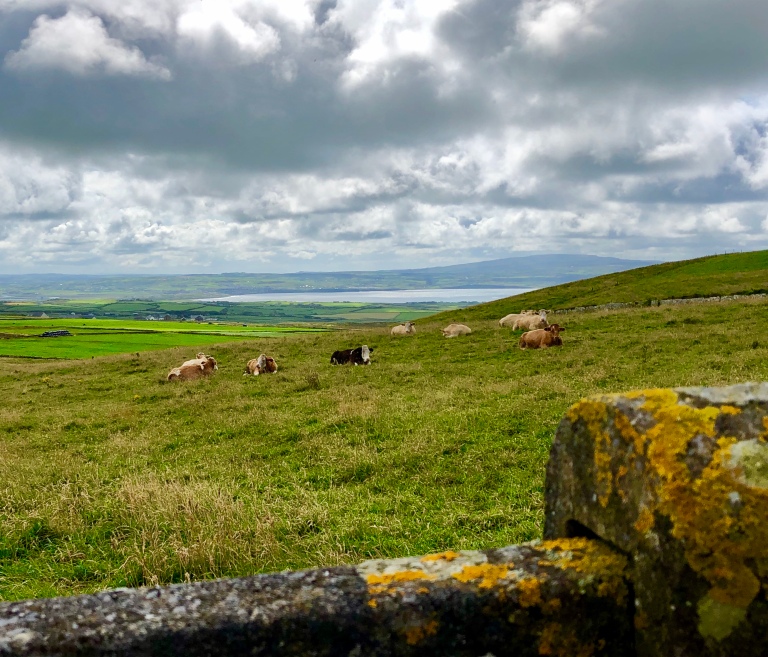 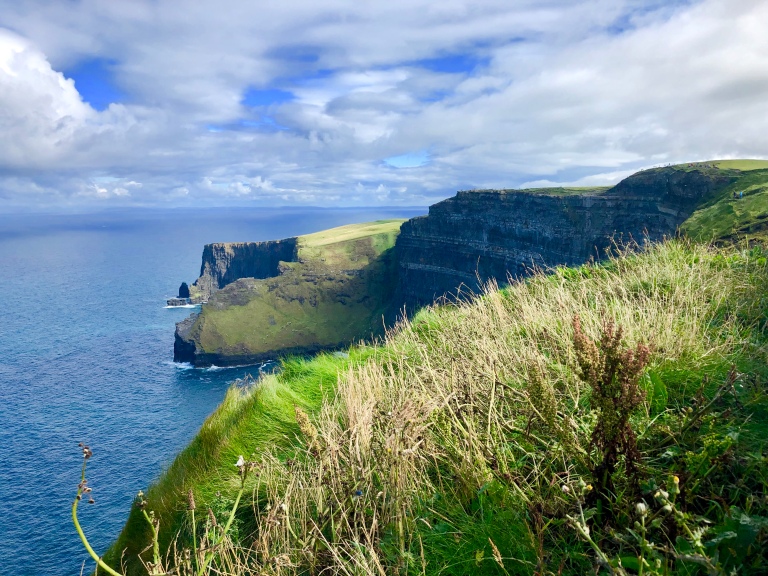 Some buskers at the Cliffs of Moher. Considering this is a very busy tourist hub, I’m sure they cleaned up! 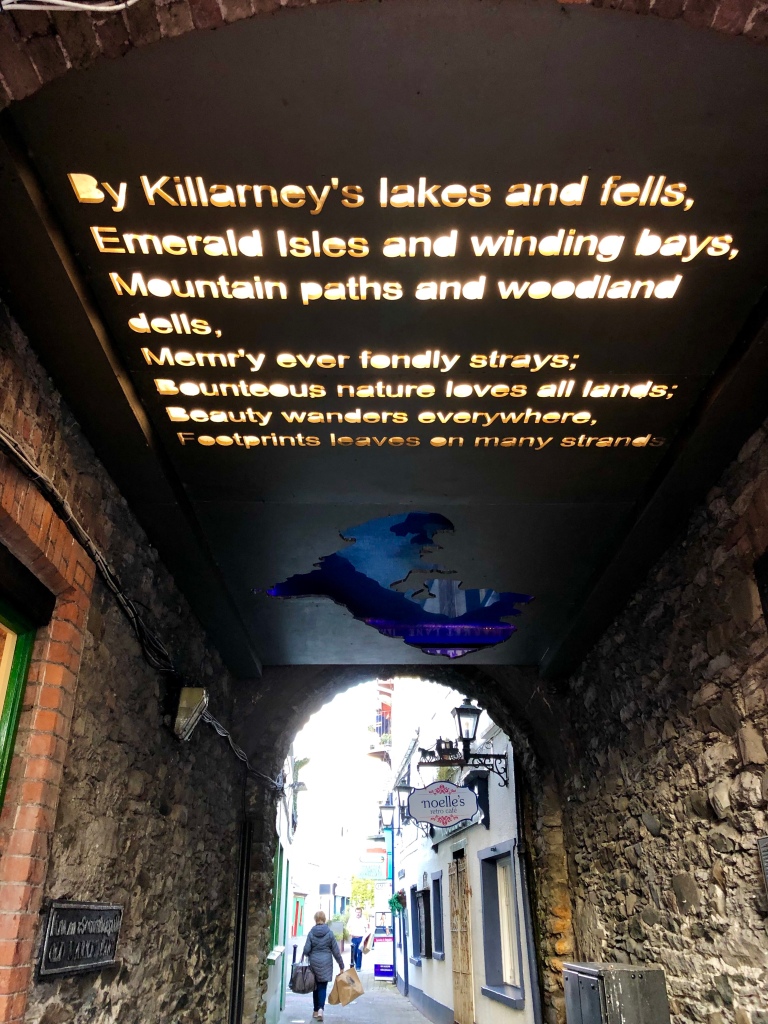 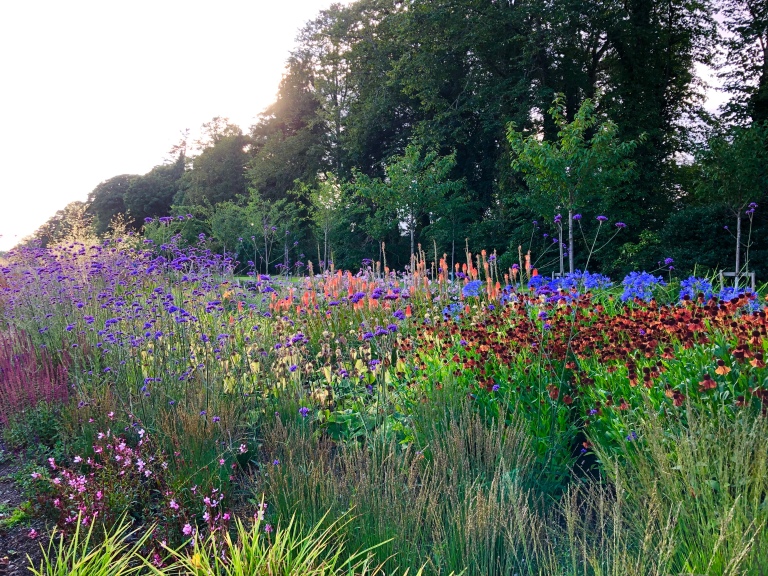 Killarney street music! Lots of this everywhere in Ireland.

He was an Irish Catholic priest and senior official of the Roman Curia. During World War II, he was responsible for saving approx. 6500 allied soldiers and Jews. His quote is behind him, “God Has No Country”, meaning he didn’t believe in borders, he helped anyone who came to him, regardless of what political side they were on. He’s quite a heroic and interesting man!

Did you know the Irish invented the portable defibrillator! I just love that they made phone booth looking places for them.

Murphy’s Icecream. Irish brand on the west coast. I sampled all the flavours, very interesting choices. All were good surprisingly. Who knew sea salt ice cream would be good! I eventually went with the Irish coffee and Irish brown bread.

Celtic Steps. This is a must if you are in Killarney. The music, singing and dancing blew my mind. Such talent!

The county of Kerry is known for its lamb, so when in Rome!

Muckross House in Killarney National Park. Made famous for Queen Victoria’s visit in 1861. 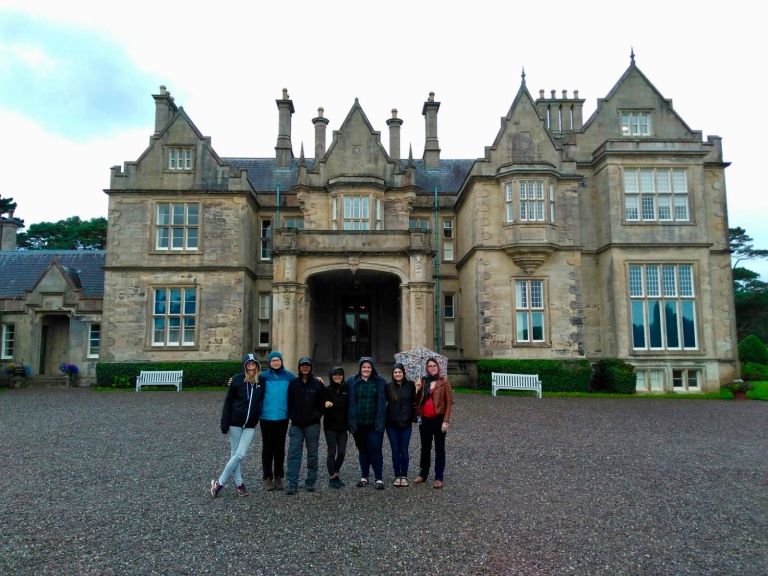 The Ring of Kerry. This is a scenic route around the Iveragh Peninsula. It’s about 179 km. Very popular drive, with many unique places to stop along the way. Here are some of my favourites! I highly recommend! 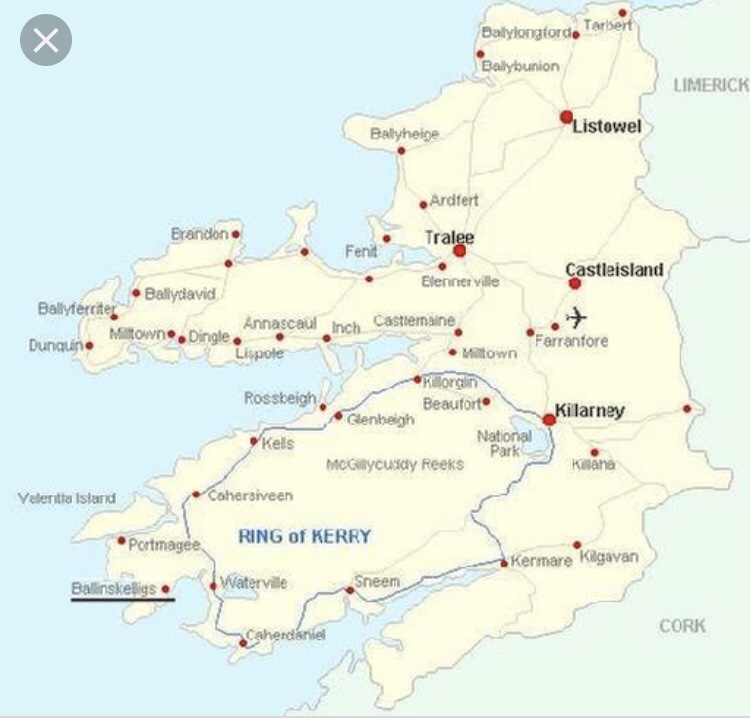 Most of the roads were like this. This for traffic going both ways, buses and all. It just works. 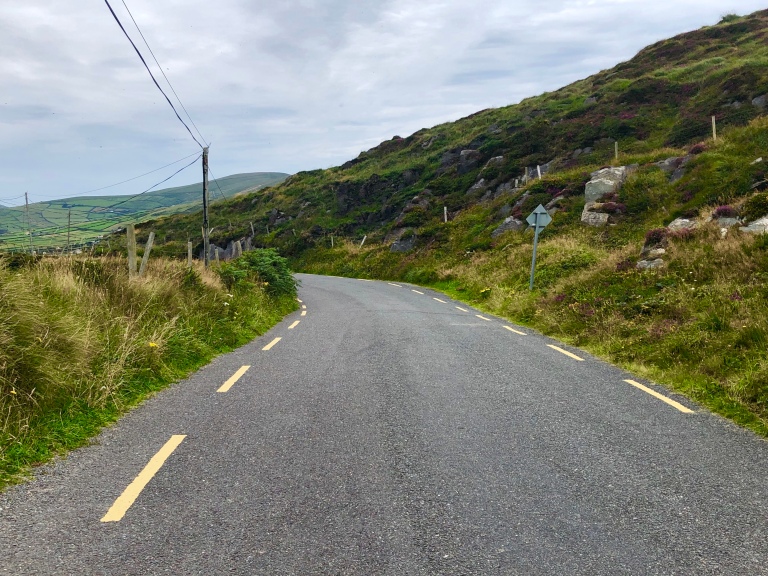 First stop,Glenbeigh, The Kerry Bog Village Museum. It’s a little village all set up old timey from the 19th century. The best parts, they claim they are the best Irish coffee in the country, I had to agree, this one was by far my favourite. Paddy’s was my favourite whiskey by far. Too bad they don’t export.

They also had these Irish wolfhounds which were super cute.

We stopped to watch a sheep herding demo in Gortaforia. Loved it. Love watching dogs with jobs loving their work. The man was so wonderful, and you can tell how loved all those animals are. Watch the video, it’s so special!

Cahergal Stone Fort. It’s a ring fort built around the 7th century A.D. You can even climb up on it. It’s really stood the test of time. 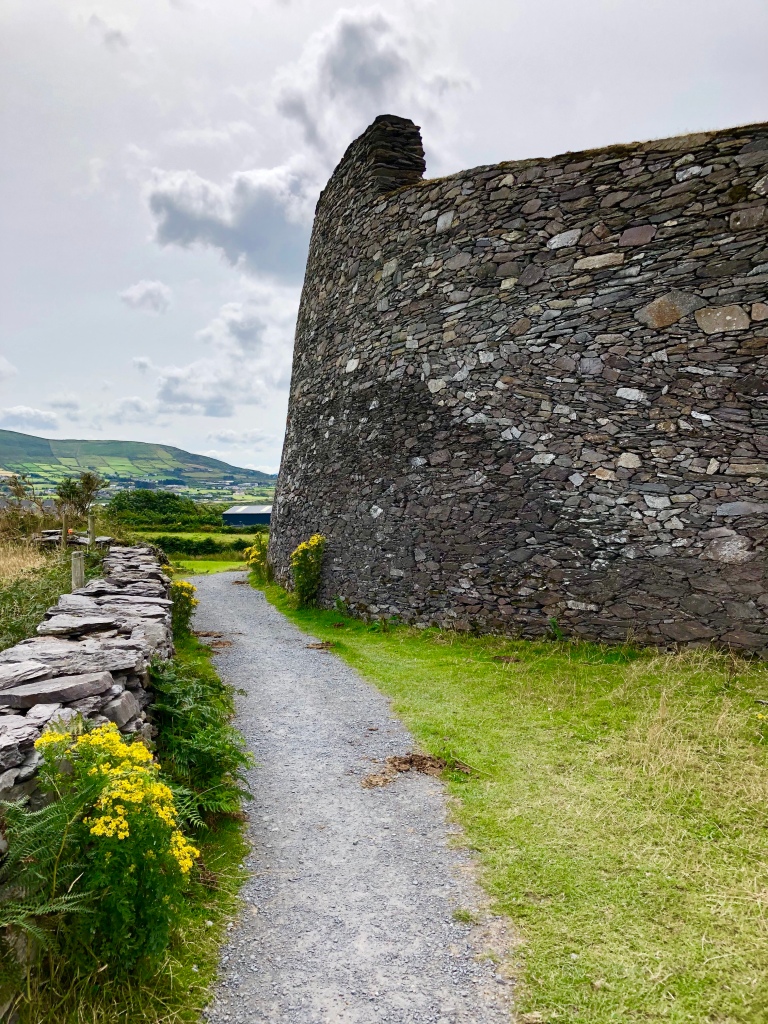 Waterville. This stop was one of Charlie Chaplin’s favourite holiday spots, so you’ll see a lot of Charlie Chaplin themed stuff around town. Deep down I was hoping that all the locals would be miming everything. They don’t, I was disappointed. Still a lovely stop, I won’t hold it against them. 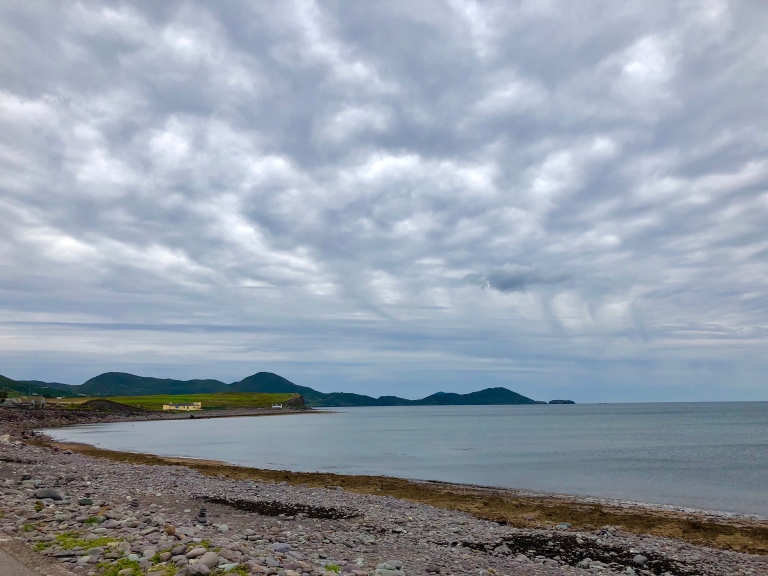 Mick O’Dwyer, famous Gaelic footballer. The only reason I’m posting this, I noticed quite a few statues they give them very real eyes. 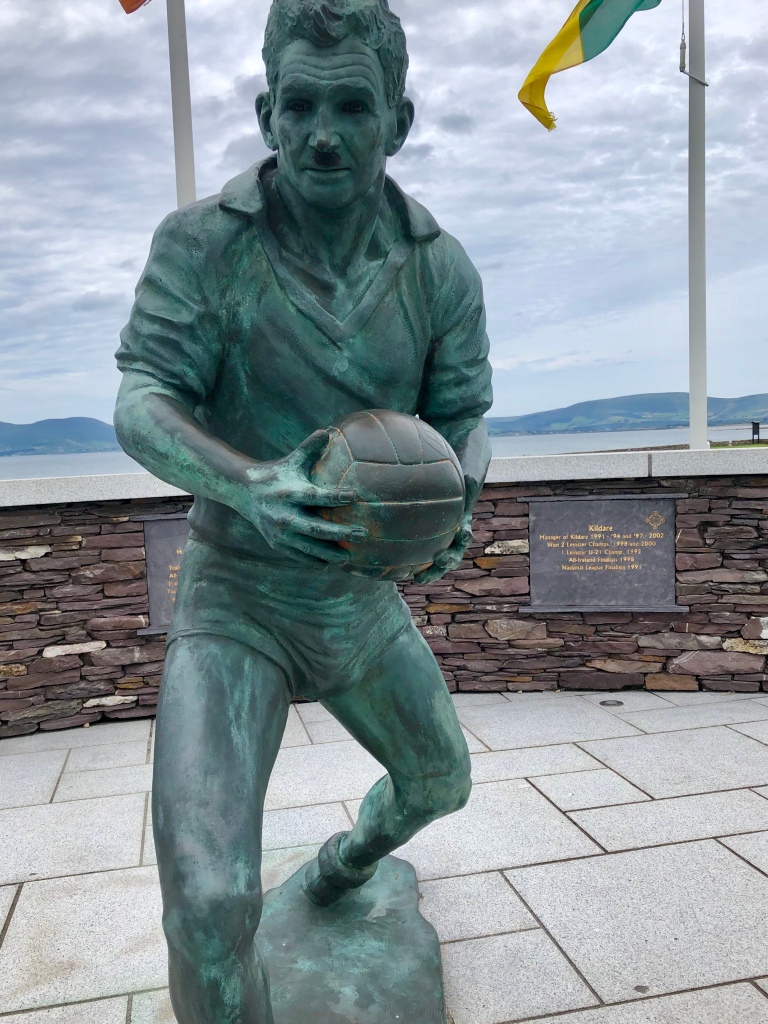 Skellig Islands. These are rocky islands about 13km off the shore. Popular spot to stop. Famous for an abandoned 13th century monk monastery on the island. Recently made more popular as the last Star Wars movie had some scenes shot there. Luke was found there at the end of the last movie or something? Sorry if that’s some spoiler, I don’t watch Star Wars, so my info could be way off. We also stopped off at a little chocolate factory here, very nice chocolate!

Ladies View, Killarney National Park. The mountain range is the MacGillycuddy’s Reeks. Nice last stop on the Ring, just as the rain set in! We were lucky for all the sun we got on the west coast.